Why finishing a piece is sometimes the hardest part 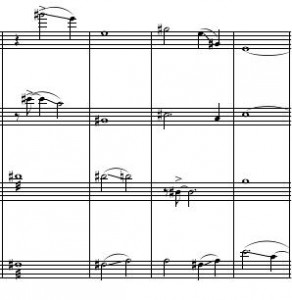 Ending a piece can sometimes be even harder than starting one. The fear of the empty page is one we all face regularly, but the fear of ending is another thing entirely.

It can stem from all sorts of issues: perfectionism, where we want everything to be just right before we send it out into the world and so tinker manically with tiny details instead of drawing a double bar line and having done with it; procrastination – for whatever reason we just can’t make ourselves work on it – this could be boredom, lack of ideas, a niggling feeling that something’s not right and it “just needs time” to sort itself out; or maybe it’s just fear – of what the world thinks of it, of what we’re going to do when we no longer have this security-blanket fallback piece to work on.

I’ve been working on my string quartet based on Rothko’s Seagram Murals since October now. Eight months. And still the wretched thing isn’t finished. This piece has dragged on so long that it now has its own hashtag: #stringquartetofdoom and I’m beginning to doubt whether I CAN finish it.

I’ve been here before, of course – the 3 minutes of Carrion Comfort that took 9 months to write looms large in my memory. And given my history, eight months on a 12-minute piece isn’t that bad really, but I need it done and into rehearsal before my lovely quartet skip off on their well-earned holidays.

I think the quartet (really must stop calling it the String Quartet of Doom and find it a proper title) falls a little into all three categories. I’ve felt a strong affinity for the material ever since I came up with it, so it’s become a bit of a security blanket – I like listening back to it, even in Finale’s dodgy rendering – but I’m also getting tetchy and bored with it because I’ve been doing battle with the same notes for so freaking long now. I’m concerned that after all this time it won’t turn out as well as I hope it will, which is a real worry as it represents what will be about a third of my final recital grade. I keep going back over stuff I’ve already written and tweaking it to be better instead of writing new stuff and then there’s just plain old procrastination because I’m fretting about certain problems with it (and whether they are problems at all or just differences of opinion but that’s a whole other blog post).

Obviously the answer is “just get on and finish it” – which I’ll do once I’ve finished this post… I hacked the end off it last night because I wasn’t at all happy with it, and am feeling much better about the whole thing since doing that.

So today I need to re-launch myself into it. Suppress that fear and just get cracking. And in aid of that, I’m posting what I have out here in the cold outside world. It’s helped before, to make me less attached to what I have, so here’s hoping it works now too! Seven minutes down, five to go…

Listen to the latest version of the Rothko quartet:

(my humble apologies too for the excessive reverb on this – Finale seems to want everything to sound like it’s in a cathedral since I reinstalled – will work it out eventually!)