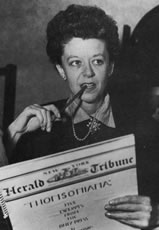 ‘It is apparent that leisure and silence are absolute prerequisites for composers if they are to engage fully the many forms of awareness involved in creative activity. This leisure and silence have become the greatest luxuries in the modern world, and composers less than any other group in art or science are able to command it.’

So wrote Peggy Glanville-Hicks in 1958. A woman of firmly held opinions, this declaration drew on her own experience as a composer trying both to write music and keep a roof over her head – she knew first-hand how hard it can be to be creative and solvent at the same time! But it was not only first-hand experience that led to her conclusion that composers should not need to be troubled with the everyday business of survival: she had also followed up her experience with an ‘extensive review of American compositions,’ in which she found that ‘the best works of a majority of composers were those written on a Fellowship or underwritten leisure.’ With such knowledge, Peggy Glanville-Hicks determined that when she died she would found a scholarship which would help provide composers with the leisure and silence they require to produce their best work.

The result of this is the Peggy Glanville-Hicks Trust. The scholarship takes the form a a period of time ‘in residence’ in her terrace house in Paddington: for the period of residency, the chosen composer need not have to seek non-compositional work to pay the rent – there is no rent to pay! The house’s maintenance costs are borne by royalties from her works, and in her will Glanville-Hicks wrote, ‘it is hoped that the residency in the Trust house will create a haven and peace of mind which will enable the composer in residence to further his or her creative work.’

Peggy Glanville-Hicks was a remarkable woman. Although scarcely known in the country of her birth, she is arguably one of our best-known and loved composers overseas, having spent by far the greater part of her life in New York, London and Greece. She was born in Melbourne in 1912, and began her composition studies at the Albert Street Conservatorium under Fritz Hart. In the early 1930s she won a scholarship which took her overseas for further study at the Royal College of Music in London – composition with Ralph Vaughan Williams, piano with the Australian pianist and composer Arthur Benjamin, conducting with Constant Lambert and Sir Malcolm Sargent. Another scholarship (shared with fellow RCM student Stanley Bate) took her to the Continent, to Vienna. As a woman composer at a time when this was still a novelty, Peggy’s choice of teacher was limited – to one; in spite of her impressive achievements at the Royal College of Music (including the composition of an opera, Caedmon), the only teacher who would take her on was Egon Wellesz. Notsurprisingly, given her solid background in the English pastoral style, Wellesz’ Schoenbergian aesthetic did not suit Peggy, and two and a half months after starting classes in Vienna, she boarded a train back to Paris, declaring that she did not want to be a ‘twelve-tone rower’.

In Paris was the famous composition teacher Nadia Boulanger. Peggy had applied to her earlier for acceptance as a student and had received no reply. Having tried the Viennese school of thought, she was determined to be taken on by Boulanger to learn about neoclassicism. She achieved her goal, through much pestering of the eminent teacher at social functions and on doorsteps, and her reports of Boulanger’s teaching were so glowing that they Stanley Bate abandoned his studies with Hindemith in Berlin and joined her in Paris.

Glanville-Hicks and Bate were married soon after their return to England, on the eve of the Second World War, and the two of them (together with friends from the RCM) organised lightning concerts of contemporary music for people seeking shelter from air raids on the platforms of the London Underground. The marriage, however, was not a happy one: Bate’s composition and performance career developed nicely, while Peggy’s disintegrated totally under the strain of keeping the two of them ‘afloat’. They moved to Australia for a year (where Peggy’s achievements as a composer were almost totally ignored, although Stanley received a number of commissions and performance engagements – mostly arranged by his wife), then emigrated to America. The couple eventually divorced and Stanley returned to England.

The move to New York was one of the most significant of Peggy Glanville-Hicks’ life. Still married to Stanley Bate and needing an income, but lacking a greencard, she turned to freelance journalism as a way of supporting herself and her husband. Many of her articles were published and she was eventually appointed as a reviewer at the New York Herald-Tribune. At the time, the American composer Virgil Thomson was in charge of music reviews. He appointed mostly composers, acknowledging their extensive knowledge of music – but Peggy was the only female music critic employed at that time. Her witty and incisive reviews (published under her initials, P G-H, only) came to be widely read and respected, and within a few years she was regularly publishing articles on music in a variety of journals and magazines, including the Juilliard Review and Vogue. She began to devote time to the promotion of new music, especially through the organisation of concerts – which naturally led to her own music being more widely performed.

The music of her early career had been firmly cast in the neoclassical mould, but she soon became convinced that, as Schoenberg’s serialism was not the answer, neither was neclassicism. She developed a new outlook on music, combing elements of both with her knowledge of more ancient music, in particular the classical music of India, and later the Demotic music of Greece: her music retained an essentially melodic quality, but her exposure to serialism led to to a ‘linear’ rather than ‘vertical’ view of musical construction. ‘Harmony – throw it away!’ was her cry, even during the time she was studying in Paris: melody and rhythm were the central elements in her new approach.

The melody-rhythm approach which Peggy employed in her compositions led her to encourage composition for instruments which she felt were ideally suited to the new aesthetic of modern music: the harp and the instruments of the much-neglected percussion section of the orchestra. Her Sonata for Harp and Sonata for Piano and Percussion are considered to be extremely important works among her compositions. Glanville-Hicks did, however, feel very strongly about new music in all its forms, and worked hard to promote new works and new composers.

She continued to support new music after she returned to Australia in the 1970s following a brain tumour operation (she had been given five years to live and spent it in the Greek islands; after seven years she got tired of waiting…), directing the Asian Studies programme at the Australia Music Centre, and ensured that her championship would continue after her death through the legacy of the Peggy Glanville-Hicks Trust. Against the doctors expectations, but true-to-form in her stubbornness, PG-H lived to the age of 78, dying in 1990.

With the aid of a Government grant, her house underwent a number of repairs to make it suitable for what she had planned for it, and the ‘haven’ finally became a reality. A number of Australian composers have already been resident at the Peggy Glanville-Hicks house. These have included Gordon Kerry, Elena Kats-Chernin and the current resident, Andrew Ford; harpist Marhsall McGuire has also been the recipient of a fellowship – not as a composer, but to allow him to work on editions of a number of Glanville-Hicks’ pieces.

Finally, it seems that a resurgence of interesting in this fascinating composer is taking place here in Australia. Publications on her may be scarce (one biography, by Wendy Beckett, and a bio-bibliography by Deborah Hayes), but there are more on the way: James Murdoch – former General Manager of the Australia Music Centre, and executor of the Glanville-Hicks estate – is currently preparing a book on her, and has recently donated the scores of her last opera, Sappho, to the Australian Music Centre Library in the Rocks, where they will shortly be available for perusal and eventually for purchase. Murdoch is also aiming to get a production of this opera (written for Maria Callas, but which has never been performed) up and running.

One Reply to “Peggy Glanville-Hicks: A lifetime’s search for leisure and silence”