The first piece of A Memory of Wind came out of the Porthleven Prize residency I attended in March 2020. Striations in the rocks seen at the Cornish beaches we visited matched up in my mind with the patterns formed by the lines on maritime charts, where numbers indicated the depth of each band on the chart. Combining the two created a collaged score where the approach to the sound is shaped by the idea of wind, water, depth and time. 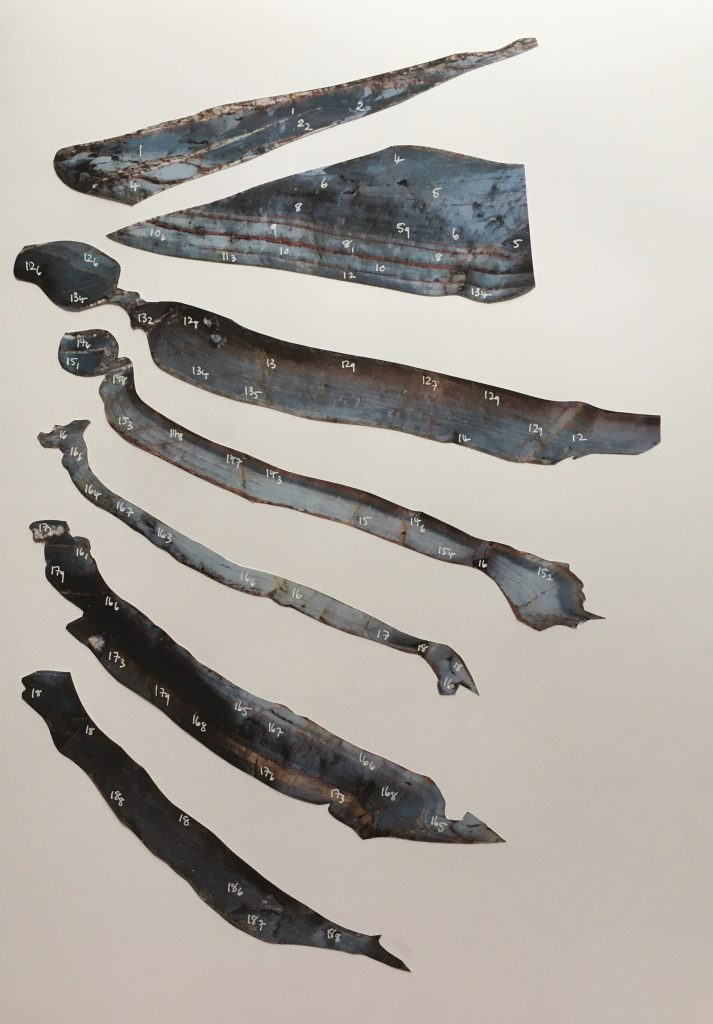 Off the coast at Porthleven, under the sea, is an area of petrified forest and the combination of rocks and depth prompted thoughts about that forest, how if it could think it might remember what wind felt like, but that being at the bottom of the sea now, the wind’s often violent effect on the waves is diminished the further down you go.

The numbers in the score range from small at the top of the page to largest at the bottom of the page. They form a rough map of deepening pitch in the piece. The performer starts with the top segment (surface, performed on the A string), improvising their way through the numbers using a wind-like tonal palette created by the use of left-hand fingers only half-touching the string in combination with flautando bowing that may move around between the bridge and the fingerboard. Movement in this surface segment can vary in activity level and is the most active area of the score – as the piece progresses through ‘deeper’ segments the activity levels reduce. The ‘surface’ is returned to between each segment of the piece, and the piece ends on the C string in the deepest segment.

As this piece does not demand exact pitches or extreme control of the bow (random harmonics and unstable tonal effects are encouraged), it is suitable for performance by any violist who has mastered the production of harmonics.

Tuning is left to the performer’s preference. The composer generally performs this piece with the viola strings tuned to F / E / A / G (this is the same tuning as for Quiet Songs).

A second movement of A Memory of Wind, for solo voice, is currently in development.