Over the past few months, my piece Whitespace has had eleven performances, and while I’m not quite done with it yet – it seems to be the piece that is perpetually redefining itself – I feel it’s time to start drawing together my ideas about it and seeing if I can make some sense of it all.

I’m not going to summarise all the versions that have been performed so far – I’ve talked about all these over on the vlog (episodes 10, 12, 13, 14, 15 and 16 so far, if you’re keen to review). Instead, I want to think more broadly – what I’ve gained from doing all this and what larger ideas have emerged that might go somewhere else.

Whitespace has been a piece that’s really surprised me in the amount I’ve learned from it and how far it’s gone – it started from ideas about my notebook as a form of studio (something which keeps coming up in discussions with my supervisors), and from there thinking how the space of my studio could relate to the space of a piece of paper. At the start, I had it firmly in mind that it was a solo piece, for me, in my studio. As opportunities arose to test it in other locations and other ways, it began to expand though, becoming an ensemble piece, finding sound in it, taking it outdoors, and now, returning to the studio, invigorated with new ideas about the space and its potential relationship to the score.

It’s important, I think, to acknowledge that this piece is also a research instrument, a way for me to understand my working spaces better. As such, moving it out of the studio and into other locations and onto other people’s bodies, has been extremely valuable. The first time I performed it (solo, in the studio), I became aware of how many obstacles there were in my room – furniture, stuff lying about on the floor – that wasn’t apparent from my normal paths across the space. The most recent performances have focused in on the sounds made by the actual things in the room, and I’m much more aware now that I have longstanding patterns of efficient movement in the studio which have been brought to light by performance. 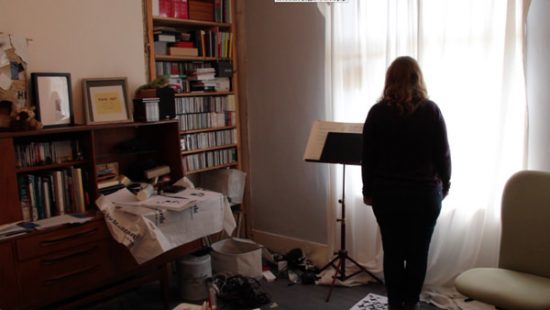 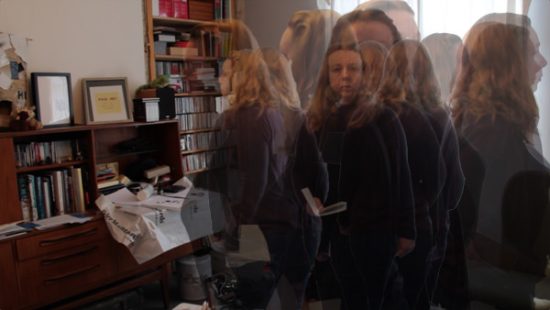 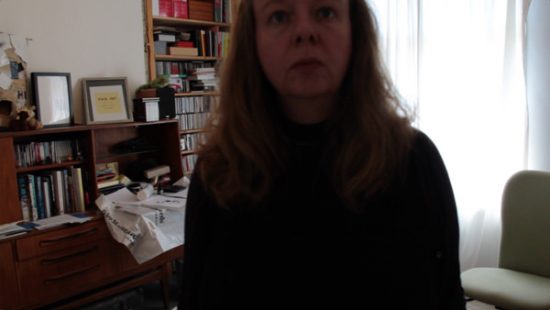 Returning to the studio after eight performances in other locations also made me more aware of the levels of ambient noise in my working space (single-glazed windows looking out onto a main road, sounds from activity elsewhere in the house) and its position as a space within a space (studio within home within neighbourhood). It doesn’t stand alone as a space – it cannot, because these surrounding spaces leak through and form part of my sonic working environment. I’ve become aware too of my own presence in my studio – initially was I so focused on what was in the room that I wasn’t thinking at all about who was in the room. But my presence is what makes it my studio – otherwise it’d just be a room at the top of the house that contains some specialist equipment.

I’ve been diligently filming all these performances, and this has been vital to identifying ideas about space, and performance within a physical space in relation to the space that is the frame of the video camera. Questions about position, distance, visible detail, identification, being in and out of frame. Also questions about who and where the audience is, and whether they really matter in a participatory piece like this which is more about performing than it is about observing or listening. The recording has been almost as important as the performing in these respects.

But where to go from here? There’s been so many ideas prompted by this piece that it’s hard to choose what to focus on. Whitespace has already led to a new project, which is in progress – an altered book, using an existing (printed) book as a notebook. The early performances of Whitespace made me realise that while my studio is almost always a mess, the pages of my notebooks are lovely and blank when I go to work on them. My physical working environment is filled with noise, but the notebook is (visually) quiet. So I began to wonder how my working process might be affected if my notebook was as noisy and chaotic an environment as my studio.

I’ve been working through drawing, collage, writing and overwriting to try out new approaches and consider my responses to this new noisy environment. I’m not sure yet whether this will be an ongoing project or a short-term experiment – mostly I’m using it to challenge aspects of my process that I’ve been taking for granted up until now.

My latest work with Whitespace is to work out how it can be accessible to other people. It’s very much a participatory piece – it’s more about doing it than watching it, even in public spaces – so I’m trying to figure out how to create an overarching score for it that allows for the variety of variants I’ve already worked through, as well as ones I haven’t yet thought of. The challenge is to be precise about what needs to be done, while being as vague as possible about how to do it, I think…

There now, that’s more the sort of title you’d expect from a PhD student, isn’t it? Don’t take this as a sign that I know what I’m doing now, though, because I really really don’t, and part of the reason I’m writing this post is to get my thoughts in order because I think I’m on the verge of being able to tie a bunch of stuff together to at least give me a vague direction to follow!

The other day I got hold of Roland Barthes’ Image Music Text and finally read his tiny essay ‘Musica Practica’. And then I wanted to give good old Roland a hug because (a) he writes beautifully and (b) there were a couple of things in this piece which seemed to be particularly relevant to what I’m doing.

Have I even talked about what I’m doing? Maybe I should, just to give you a quick context to what comes next. The topic I proposed originally was (*deep breath*):

Questioning the division of ‘public’ and ‘private’ creative spaces through an interdisciplinary approach to composition derived from a performative interpretation of visual art processes.

The plan was to investigate the working process of the German artist Anselm Kiefer from a performance aspect, drawing ideas from that to explore through composition but limiting the application of those ideas to the exploration of public and private spaces (and especially the idea of normally-private things being public and normally-public things being private) to keep it all manageable. Over the course of the past few months, Kiefer’s role has shrunk and shrunk until he’s but a glint of an idea that started the whole thing, and the public/private idea has taken centre stage. Somehow the interdisciplinary composition thing has also increased in importance, even though it’s really just how I work.

So when I read the opening of ‘Musica Practica’ –

– I pretty much squealed with joy (although very quietly because I was in a library). And when I got near to the end of the piece, I silent-squealed again, because Barthes’ definition of composition seems to me to be wholly open to the idea of interdisciplinary – or indeed postdisciplinary – composition. New Discipline FTW.

Squish these two together and there’s my project really.

So in thinking about all this, I worked my way towards a diagram of a creative continuum which moves from the private area of studio, score, rehearsal and performing towards the public arena of performance and exhibition of varying types.

Because of the inter/postdisciplinary nature of what I do (still trying to work out whether inter- or post- is the more appropriate prefix here) I’ve tried to look at this continuum from both a music and art perspective to see how and where the process differs. The aim of the diagram is to consider what results if the private process is made public at certain points and the names at the bottom indicate some artists/composers who engage with crossing the public/private divide. For example, one we’re all used to is the private act of performing happening in public which results in a performance that other people are listening to – but how about the other end of the spectrum? Visual artists routinely send their work into the public arena directly from the studio because they are creating a physical finished artwork. But in music, the type of work that goes public from this point tends to be pieces that perhaps don’t need live performers – fixed media pieces, for example – so there’s a question right there of what sort of work could involve a live musical performance in the studio and how to send that out to the world.

As it’s early days for this work yet, there’s no doubt gross generalisations and my examples are just who came to mind instantly – I make no claim to any of this being thorough! But of course I’d be delighted if you have suggestions of work to follow up that might be useful/interesting – please leave me a comment if you do! Since originally creating this diagram, I’ve also developed ideas a bit further to acknowledge that the studio location may also be a stage, especially for visual artists (e.g. Nauman, Acconci, as the location where they performed alone for the video camera), as well as the wall of the gallery (a public stage as opposed to the private stage of the performer playing the tuba for a houseful of people – the difference being that the artwork is complete when it goes up onto the gallery wall while there is an ongoing private act of creation still happening with the live performance) but this is still a bit hazy.

Similarly, the line about unseen/unheard/seen only by performer/heard only by performer is the tentative beginning of what may or may not be an actual idea regarding levels of privacy. More work required here!