Many people have rituals for each New Year. Those famous resolutions, so often doomed to failure after a few weeks, used to be mine, until I realised they didn’t work, so now every year I write two blog posts. The first is a list of 10 good things about the year that’s past, to focus on achievements and gratitude rather than beating myself up too much over the stuff I didn’t get done, and the second is a list of goals I want to work towards over the course of the year ahead to clarify what’s most important to me.

Invariably, writing up these two posts leads on to further thinking about my work and life and reorganising of stuff and ideas, and musings on potential changes of approach. Which brings me right here.

As you may know, a significant component of my MFA project involved investigating and addressing creative fear, both as a concept and in practice. I did quite a lot of reading around this topic and ended up in a place where most of what I did in the second half of the degree was driven by a mantra:

By ‘follow the fear’ I mean that if something scared me – really scared me – then I took that as a sign that it was something I had to do. Worried that a piece of music in video format shouldn’t really be considered music? Do it anyway! Scared that using chance procedures will result in music which doesn’t sound nice? Give it a go! Fearful that a non-aural recording that relies entirely on the imagination of someone looking at a piece of art might be considered self-indulgent and pretentious? Won’t know till you try it!

Unexpectedly, though, following the fear seemed to reduce the amount of fear I actually felt and converted what had previously been fear into exhilaration and a sense of daring. I realised through writing my annual blog posts that following my fear had in fact led me to a new ‘safe’. It is now easier for me to work on crazy experimental stuff that borders on performance art than to work on conventionally notated music. Partly because I’ve become accustomed to challenging the borders between creative disciplines, partly because I have  friends and colleagues who are very enthusiastic about this work and encourage me to take it further, and partly because those same friends offer me opportunities to get this work performed/presented easily and regularly.

Which is grand except that now I realise that I feel fear around other areas of my work – fear that was there before but which was so overshadowed by my fear of challenging disciplinary boundaries that it felt like safety.

So it seems that I need to not only follow the fear, but chase the fear – seek out what things still scare me about the work I want to do and actively pursue those things. Previously the fear seemed to be in one direction, but now I see that it is all around me.

Right now, I can see two specific areas I’m going to need to focus on: Notated music now raises the (irrational) concern that it will be unoriginal, dull, that I will get stuck and that nobody will like it when I do finish it. And fundraising (particularly applying for grants for composition projects) is a mire of fears about rejection, project management ability, responsibility and originality of ideas and so on. 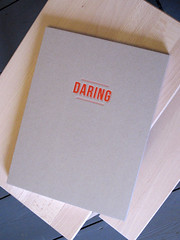 So I’m declaring 2015 my Year of Fear. My lovely sister-in-common-law (who is herself a specialist in stage fright in her Alexander Technique practice) gave me this beautiful journal (right) for Christmas, so I’m planning to use it to track this exploration, as well as blogging my progress and ideas here.

I’m hoping that if my experience last year is indicative of what generally happens when you follow your fear, I should be able to reach a point where these things too are a new ‘safe’, after which either shiny new fears will emerge to be pursued, or perhaps my various safe points will merge and new scary ideas develop from that!

How do you deal with fear in your creative work? Do you think much about it? Do you have a particular strategy or process for dealing with it? What do you think of this idea of following your fear? I’d love to hear what you think, either in the comments here, or to @minim on Twitter.