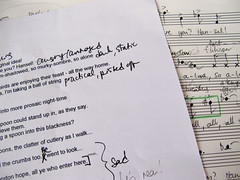 My main focus recently has been a 5-minute dramatic monologue for unaccompanied soprano, called Breadcrumbs. I’m writing it for Julia Weatherley, a marvellous singer who is also studying at Trinity Laban Conservatoire of Music and Dance. She asked me to write a 5-minute unaccompanied piece for her final recital in September and we decided that this would be an excellent opportunity to test out some ideas surrounding the chamber opera I’m going to be writing for her next year.

Hence ‘breadcrumbs’. The opera is to be based on fairy tales and my idea had been to take the arc of a well-known fairy tale, which at the moment will probably be ‘Hansel and Gretel’, but – inspired by Jennifer Walshe‘s multilayered theatrical work – to use it as a framework to hang all sorts of other related material from. I did a lot of thinking about how this layering might happen and the text was kind of an obvious starting point. I considered writing my own text. Then I considered commissioning a libretto, then collaborating with a librettist, and finally came full-circle to face the idea that if I was even considering writing a whole libretto, I should first have a go at writing some text for something shorter. Which is this piece.

Even more than most of my other pieces, ‘Breadcrumbs’ has had quite a huge research/mental incubation phase. I read (and am still reading) a number of books of fairy tales – Joan Aiken and Jan Pienkowski’s stunning The Kingdom Under the Sea which provided the visual stimulus for the opera’s concept; The Annotated Brothers Grimm; and Angela Carter’s fascinating The Bloody Chamber, which a friend lent me and which is retellings of fairy tales from different perspectives and with a very modern sensibility; L. Frank Baum’s volume of American Fairy Tales. I thought about other material I might want to weave into the production, particularly tangentially related stories – things which aren’t really fairy tales or folk tales but which in my mind are related – Dante’s Inferno [sideline: have you seen that Clive James has just released a translation of the whole Divine Comedy? OMGSWOON!], Arthurian legends, Susan Cooper’s The Dark Is Rising books, The Wizard of Oz.

I slowly developed a structural concept for the piece – the context is that Gretel is alone in the wood with evening drawing on. She has lost Hansel and is angry at him for the breadcrumb plan going wrong. The piece draws an arc showing her feelings for him – anger at him, worry for him and for herself, joy at finding him again – with a touch of anger thrown in again as it so often does when a child has wandered off and then been found again. Interspersed among her outbursts are expressions of fear and wandering thoughts.

When I finally came to write the text, it actually all came very quickly. I had one night where I just couldn’t get to sleep, so I’d been thinking about the piece and had an idea how to start it: ‘Breadcrumbs! Breadcrumbs! [scathingly] Such an original idea! My brother, the genius’ and after mulling on it for a while I figured I’d better write it down or lose it. Hurrah for the iPad by the bed! So I wrote it down, and a couple more lines were added. Closed the iPad, tried to get back to sleep, failed, opened it again and wrote a few more lines. By the end of about 3 hours of this (at about 3am) I had a pretty clear draft of the entire text, which was:

Breadcrumbs! Breadcrumbs! Such an original idea!
My brother the genius – Hansel, where are you? Hansel!
Each alone in the dark wood – so dark-dim-shadowed, so murky-sombre, so alone

Breadcrumbs! Breadcrumbs! I hope the birds are enjoying their feast – all the way home.
Next time our father takes us out to kill us, I’m taking a ball of string
Hansel. Hans?

Twilight. Evening. Past crepuscular and into more prosaic night-time

I’m so afraid of the dark. A darkness a spoon could stand up in, as they say.
I don’t have a spoon right now, but I believe them.
Who’s them? Why did they think to bring a spoon into this blackness?

I have visions of groves of standing spoons, the clatter of cutlery as I walk…

Breadcrumbs! the bread all gone – and the crumbs too. I went to look…
Hansel!
Darkness reveals the worst of us. Abandon hope, all ye who enter here.
I’m a bad sister, I know it. Poor Hansel!
He doesn’t have a spoon either,
To sample the quality of the night.
I can hear his bright sunshine-laughter.
That same yellow laugh he gave, so full of delight to go hunting with my father – joy at any new shiny thing.

Is that a light? Is it?! Such a wonderful smell! So sweet-spicy! Gingerbread!
Honeyed beacon! Oh sweet illumination!
Our sweet safe haven?

It didn’t really change very much from this until I started to compose the piece, several weeks later. As I’d been hearing the notes in my head while writing the text, I felt I was fairly aware of the musical shape I wanted the work to take. My biggest problem was trying to work out what the actual pitches should be – as a dramatic piece there’s a certain amount of parlando, sighs, indefinite pitch stuff and I found it quite difficult to interpret what was in my head into pitches either on the piano or attempting to sing myself – not being a soprano about a third of the piece lies above my range and it just didn’t sound right trying to sing it an octave lower or as notes on the piano or if I attempted to squeak it at pitch. I suspect this is something that just requires practice.

Eventually, of course, I got the pitches down, worked on the rhythms. Of course one of the benefits of writing your own text is that you can just cut or change things as you go along, depending on what works, what doesn’t and what seems to be missing. No need to check with anyone, no need to feel guilty or justify the change. I haven’t really made any huge changes, but there have certainly been some. This is where it is now:

Breadcrumbs! Breadcrumbs! Such an original idea!
My brother, the genius!
Hansel! Hansel, where are you? Hansel!

Twilight, twilight, evening.
Past crepuscular and into more prosaic night-time.

I’m so afraid of the dark.
A darkness a spoon could stand up in, so they say.
I don’t have a spoon – I don’t! – but I believe them, I believe them.

Visions, I have visions of groves of standing spoons, visions, visions.
A clatter of cutlery as I walk.

Breadcrumbs. The bread’s all gone. And the crumbs too.
He went to look…
Oh Hansel. My Hansel. My brother.
He doesn’t have a spoon either. (sigh)

I’m pretty pleased with where the piece is now and have sent it off to Julia to get her initial impressions, discover if any of it will be impossible to pitch and so on. I do suspect, however, that I may end up extending some of the more arioso sections – in particular ‘past crepuscular’, ‘groves of standing spoons’ and maybe ‘abandon hope’ as at the moment the piece feels perhaps a little fragmented by veering back and forth between recitative and arioso sections. This may involve having to write more text, or possibly I can do it just with repetition or wordless sounds like the humming towards the end.

Have you ever written your own text for a composition? How did you find the experience? Please share in the comments!

One Reply to “Breadcrumbs: Writing your own text”