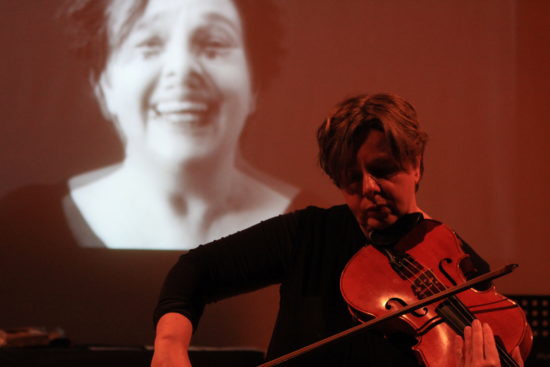 Quiet Songs was written for Bastard Assignments’ performance at Aldeburgh Festival in 2019. Written for the composer to perform, it sets live detuned viola against a constructed video part of silenced and manipulated vocal and viola performances by the composer. Starting with a simple mirrored relationship between the two (the viola provides the sound for the silent vocal performance onscreen), they quickly take different but related paths, coinciding here and there throughout the piece.

The viola uses very few traditional playing techniques. Using scordatura (the strings are retuned to F-E-A-G), a wide range of playing positions (near, on and behind the bridge all the way to the fine-tuners and over the fingerboard all the way to the scroll); creating white noise by bowing the body of the instrument in various places), and noise effects.

The audio in the video part uses recordings made in the composer’s studio – most notably via a contact microphone positioned on the window, simultaneously capturing the sound of the performance in the studio and the sounds of the street outside.

If you’re interested in learning about the development of this work, there’s a playlist of work in progress sessions and vlog episodes on YouTube and selected images and updates on Instagram. 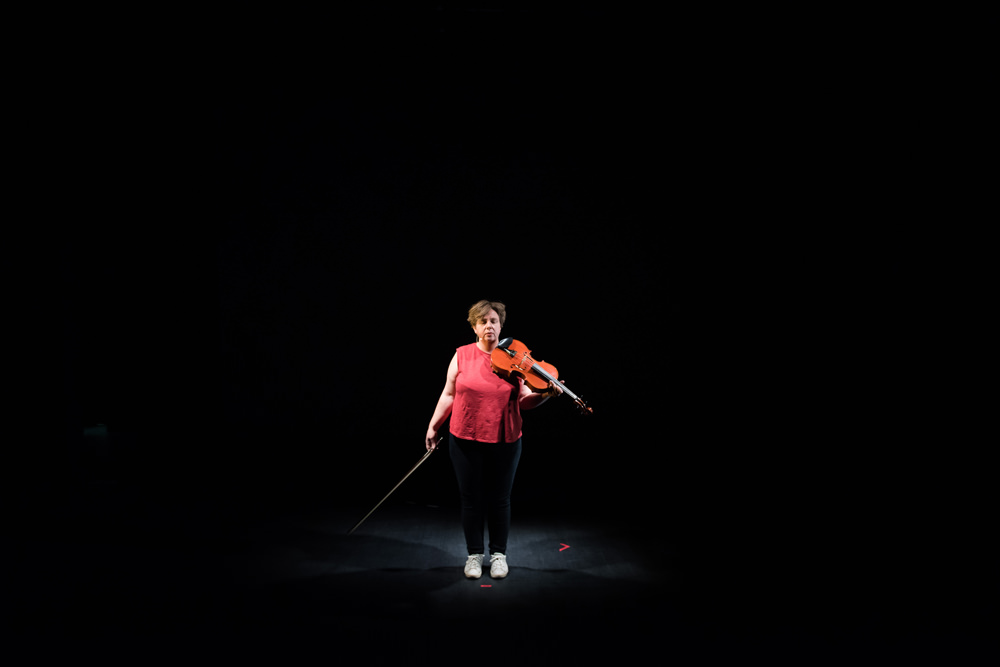 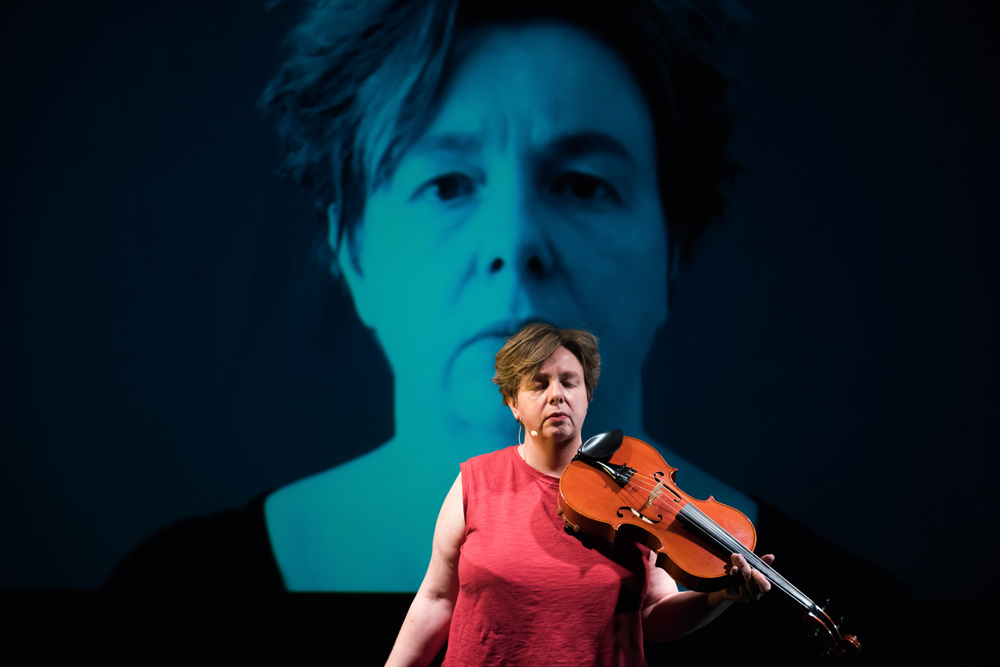 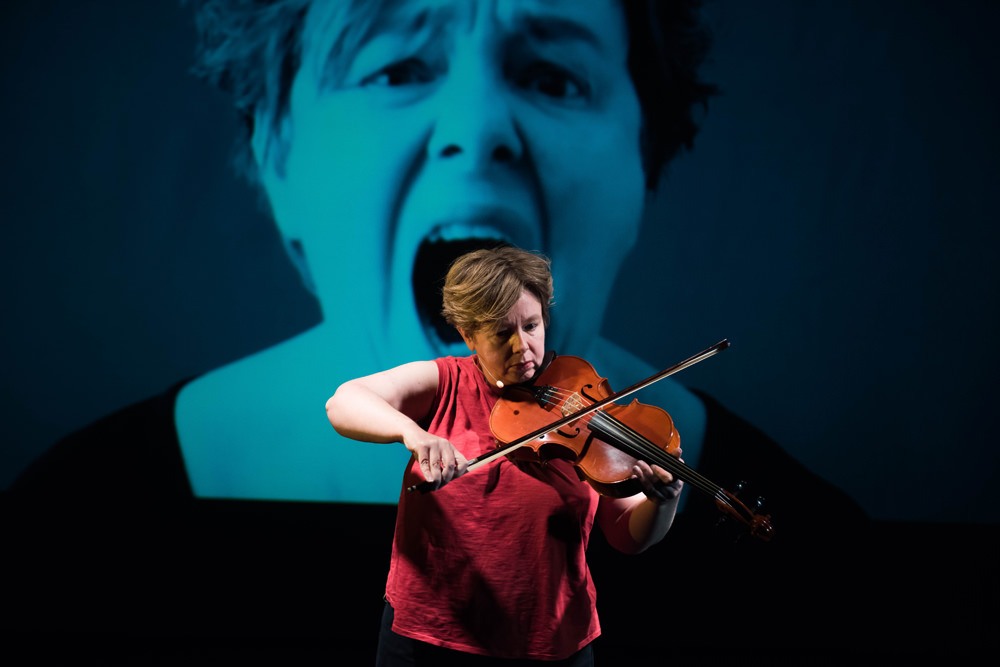 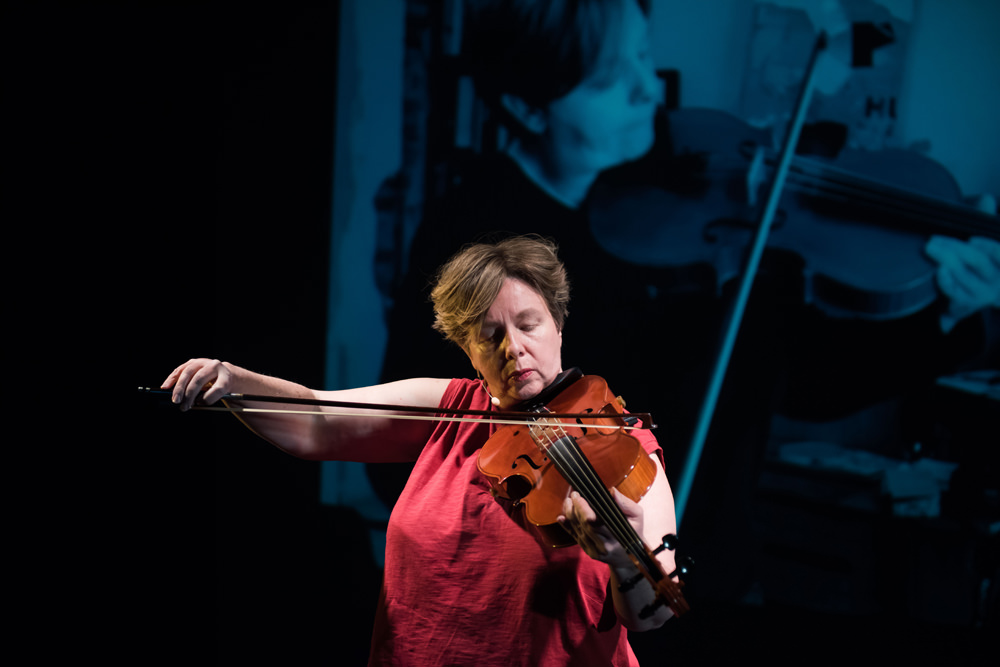 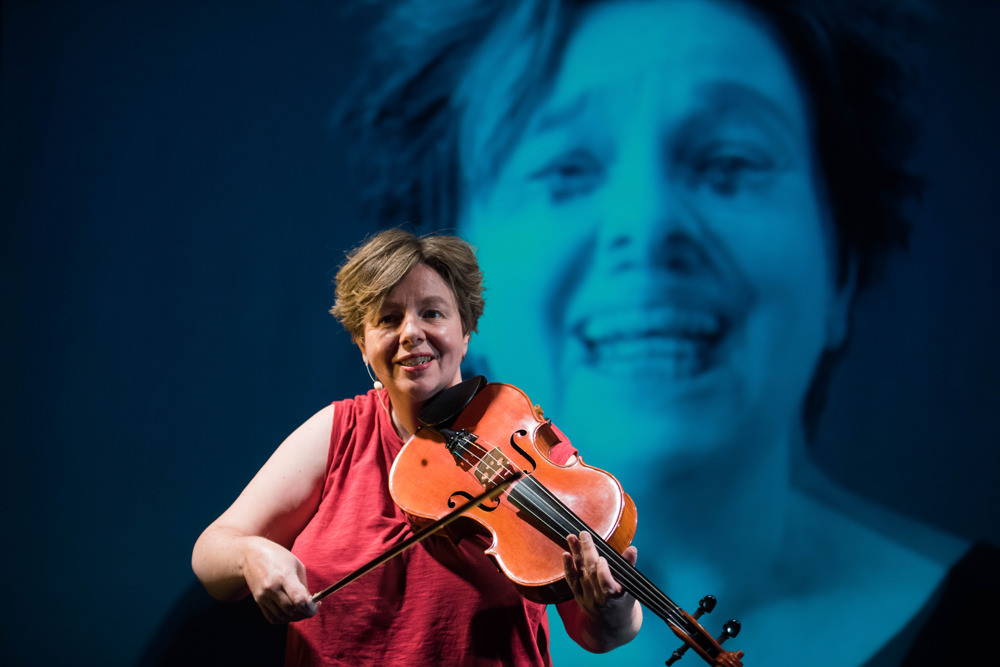 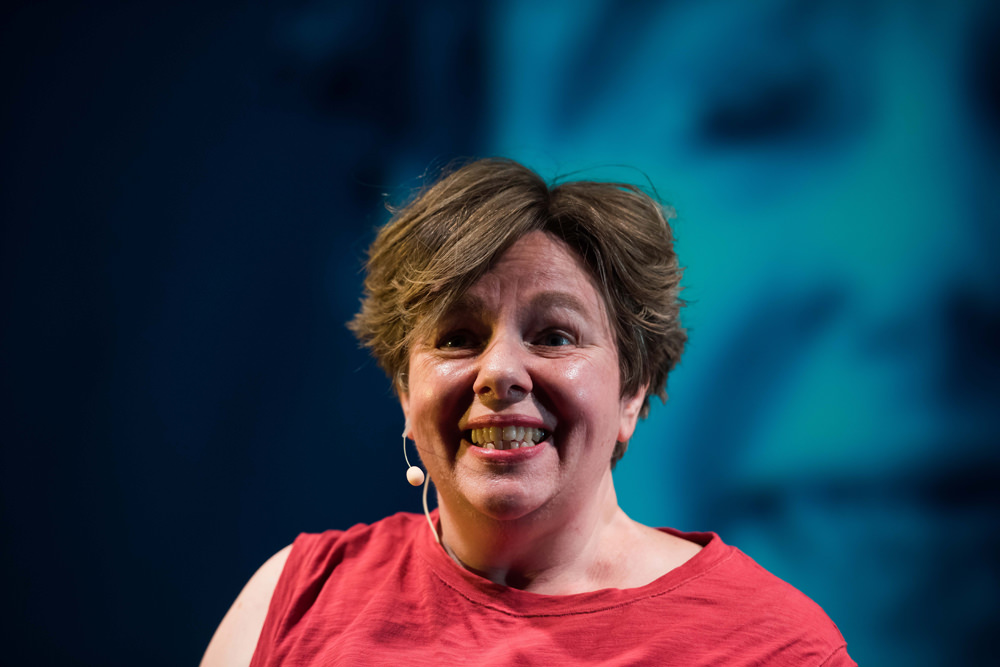 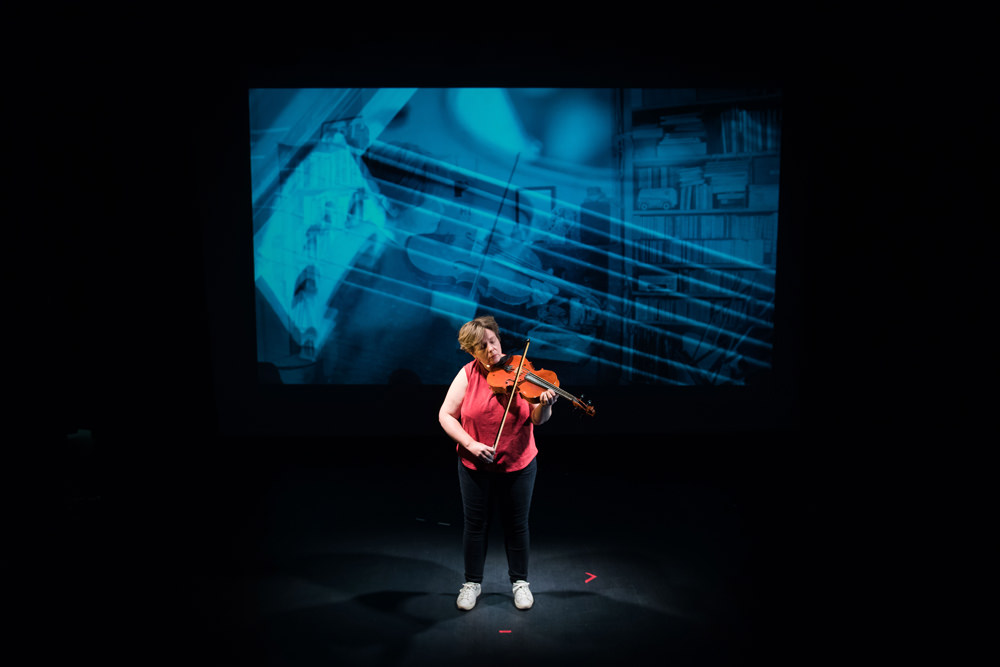 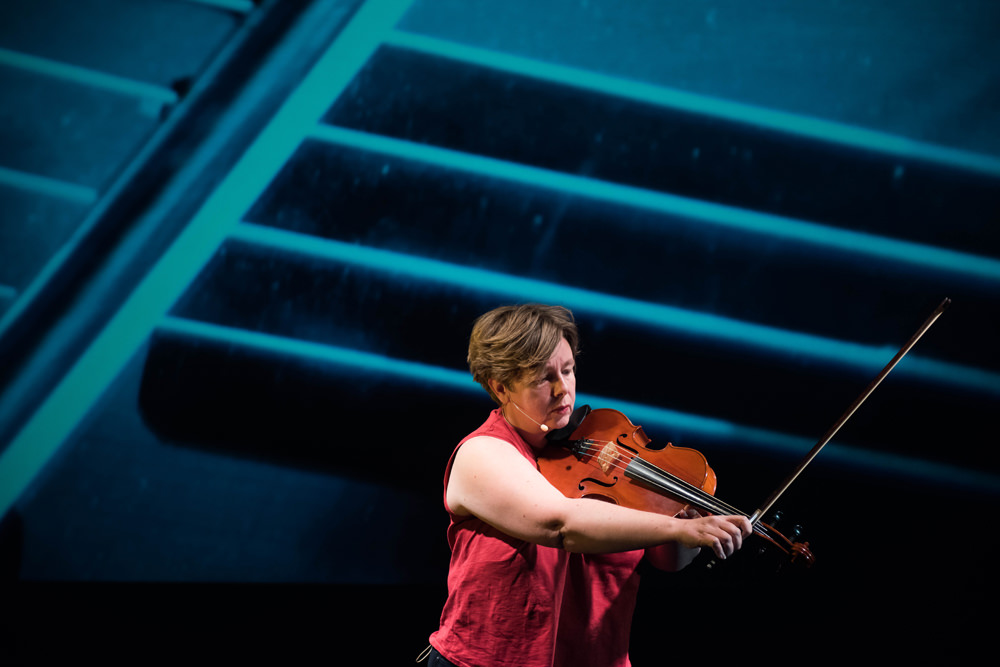 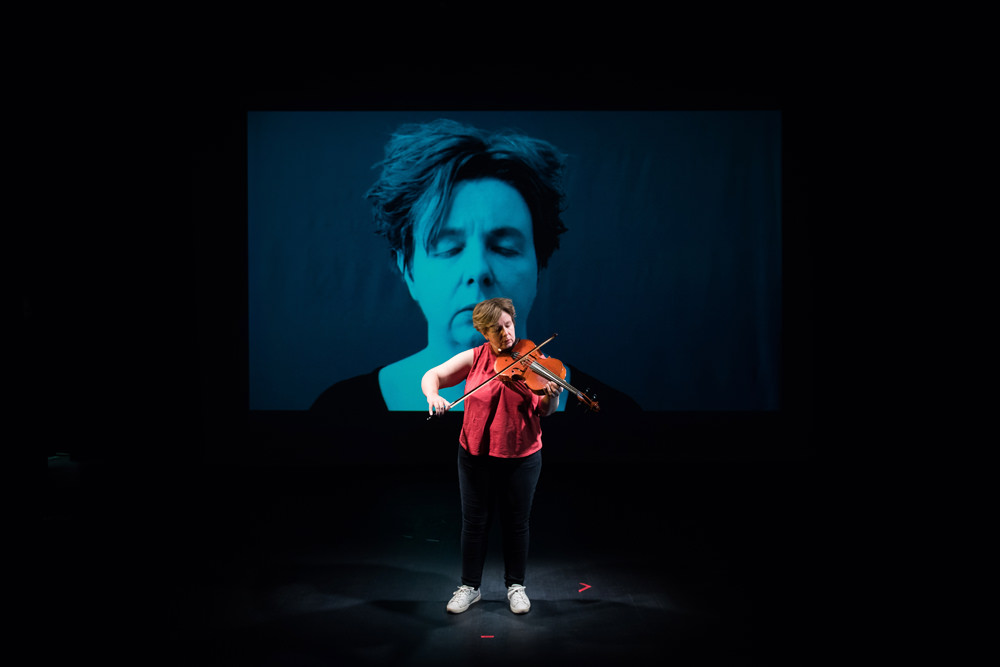 A hybrid piece about the technological ways we capture memories and how captured memories relate to recollection. This piece uses field recordings collected by the composer across a 12-year period, narration and the sounds of live photography.

Community of Objects explores the private act of performing and the private space of the score within the situation of a public performance. The piece’s score is also its principal instruments – a collection of handmade paper boxes that are handled with gloves and bare hands, and which are destroyed during the performance.

The sounds of the piece are chiefly the sounds of paper-handling, crumpling, tearing, etc. These very quiet paper sounds are interspersed with sounds and actions prompted by the contents of the boxes, discovered by the performers over the course of the piece. The box contents (which are likely to be different at each performance) relate to the uses of boxes in everyday life, and to the material from which these boxes are made – paper.

Opening the boxes before the performance is forbidden, and as they are destroyed after they have been opened, the sense of private experience when performing this piece should be heightened – as the performer, you are the only person (apart from the composer) who will ever experience this set of boxes, and, crucially, you are the only person who will ever get to experience discovering the contents for the first time. It is hoped that the experience of performing the piece will be one of curiosity and occasional delight.

Community of Objects was written for Plus-Minus Ensemble, who gave the first performance at Bath Spa University in May 2017 and will perform it again in March 2018:

It has since been performed three times by Bastard Assignments. The following video was taken in the Britten Studio at Snape Maltings:

Writing about Community of Objects

Text score for a performed piece of any duration for any number of performers.

This piece is currently in development. At present, the intention is:

The score for this piece contains a simple text which each performer should use to create an entire notebook of variants which will serve as a handbook of ideas from which to develop a live performance version of the initial score. The notebooks should be displayed (open at a single spread) where the audience can see them at the performance. The variants may be drawn (using wet and/or dry media), collaged, described, included as video or audio of a performance interpretation (performers may want to consider the use of QR codes to include these digitally recorded versions in their books), or any other form or media that comes to mind.

The final performance may take any form the performer chooses. Performances that are created as scores become separate but related works, which can be performed in future by performers who have not undertaken the notebook process.

trainlines is a piece for private performance on an intercity train. It is a text score for an improvised performance consisting of simple drawing and listening, suitable for performance by people who don’t usually perform or draw. As it is a private performance, there is no need to announce what you are doing – it is simply performing for your own pleasure. Each performance will result in a unique drawing, some examples of which are displayed below.

If you have performed trainlines and are open to sharing your experience, I would love to hear your thoughts on the piece and see a photograph or scan of the resulting drawing. To share these, please email me at trainlines [ at ] caitlinrowley [ dot ] com or tag me on social media.

On an extended visit back to Australia after seven years away, I found myself homesick for England. The contrast between the soggy grey British early winter I’d left and the Australian summer I found myself in was extreme, and these pieces reflect those contrasts. Combining photographs of Australia with textual recollections of England, and each of them posted to a different recipient, they sit somewhere between art, imagined music and poetry and explore remembered and imagined sounds.

Homesick Piece No. 1: At 42 degrees Celsius
for Edward Henderson 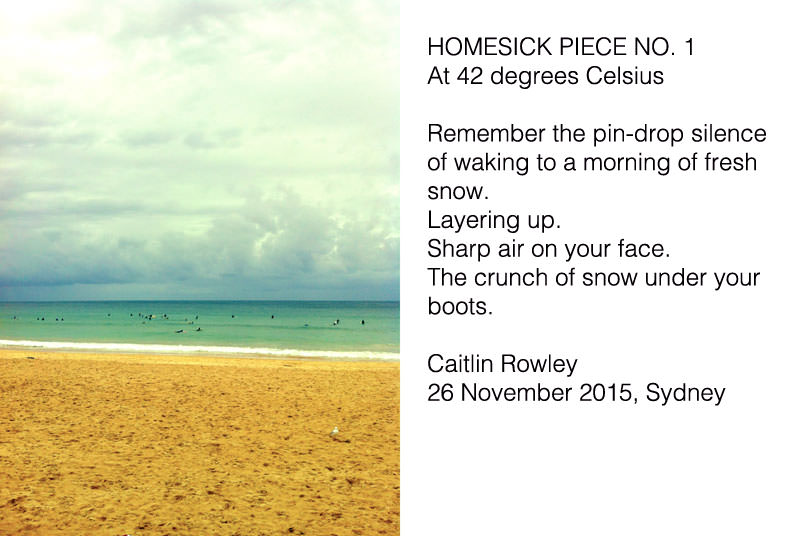 Homesick Piece No. 2: After days of torrential rain
For Timothy Cape 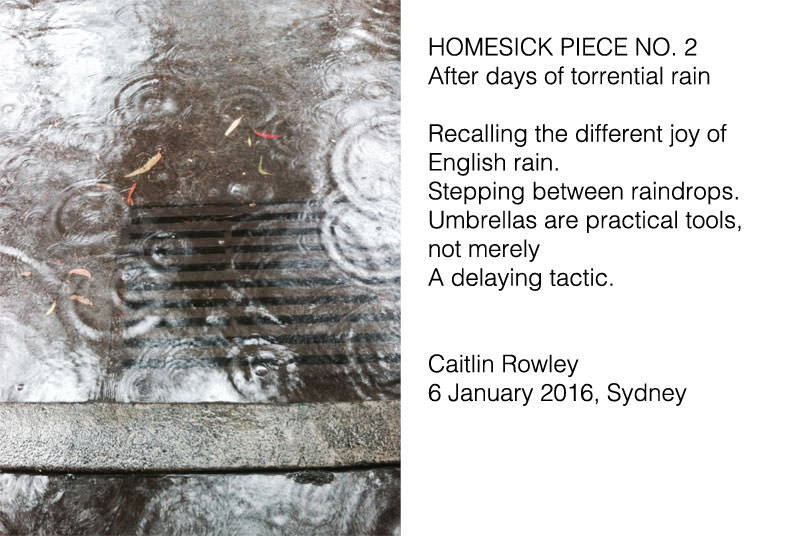 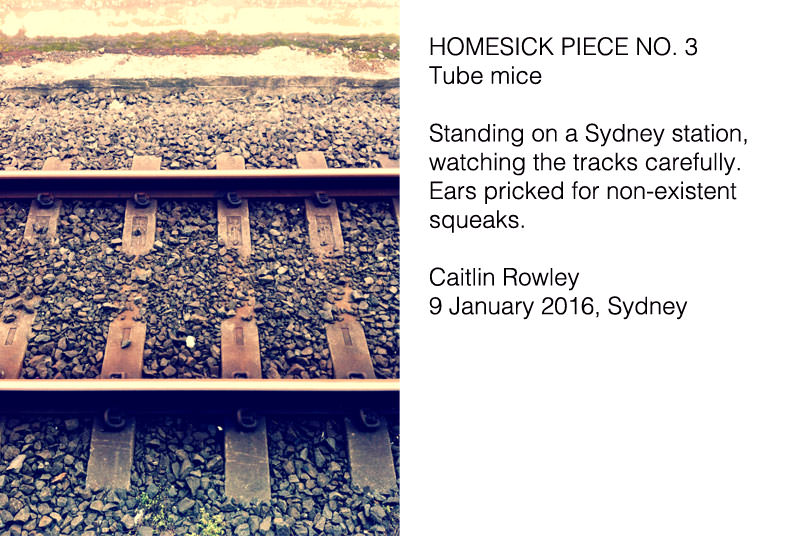 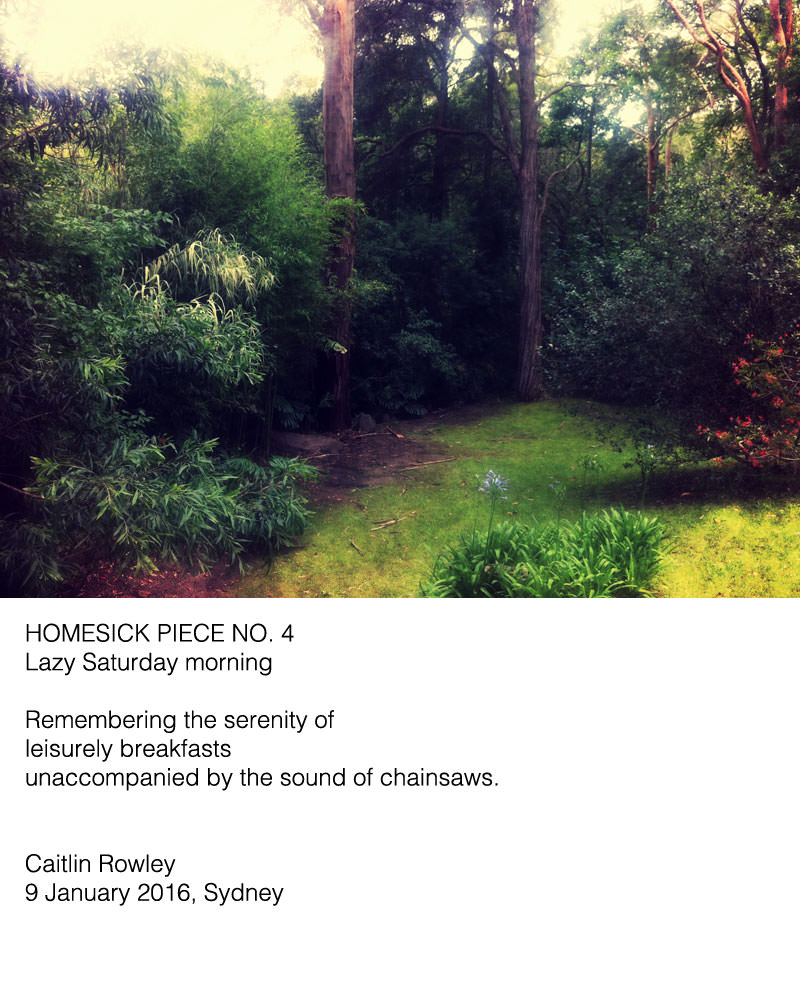 Artwork commissioned by Janet Oates for the exhibition ‘Closet Music: Imaginary Soundworlds’ at The Proud Archivist gallery and cafe in Haggerston, London (14-28 September 2015). The brief was to create a new black & white work to the idea of “what does music look like?” and the subsequent print was exhibited in the exhibition and reproduced on vinyls for window display at the venue 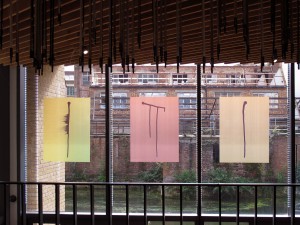 Sounds We’ll Never Hear is an installation which explores physical recording media’s issues of longevity, how sound and imagination interact, and visual contexts for sonic content.

The installation was prompted by seeing Rose Finn-Kelcey’s The Magpie’s Box (1977) at Tate Britain. A box containing a range of magpie-related materials, including a reel of tape described as ‘audio tape of magpie sounds’, Finn-Kelcey’s work prompted me to think about how a recording in this context can never be heard because it’s been incorporated into a visual artwork – it is no longer a sonic object but a visual one. That led on to how the viewer is entirely dependent on the artist’s description of the recording to shape how they think about it (what sounds they might imagine, how they view it in the context of the rest of the work, etc.) – their experience is formed second-hand, as it were, because they cannot just pick up the recording and play it.

Sounds We’ll Never Hear takes these concepts and works with them in a playful way. Presented in archival boxes, padded and lined with felt, each recording is displayed with a card which tells the viewer about the sounds on it. The presentation of these recordings as a) damaged beyond use and b) as part of a visual artwork doubly negates the possibility of the statements on the cards ever being verified. Are the labels accurate or do they mislead us? We’ll never know… 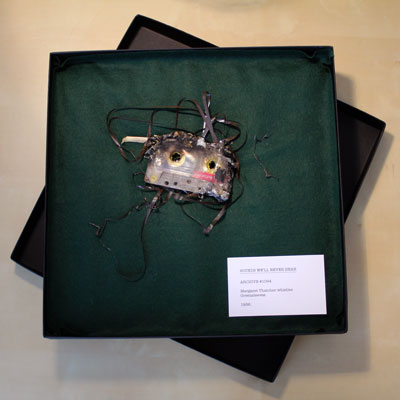 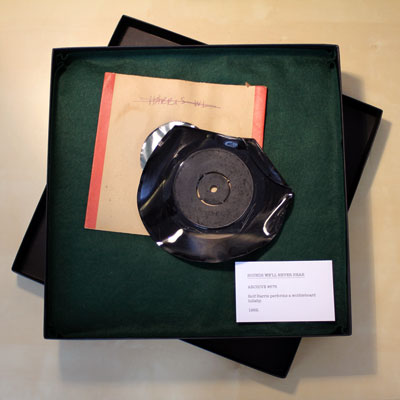 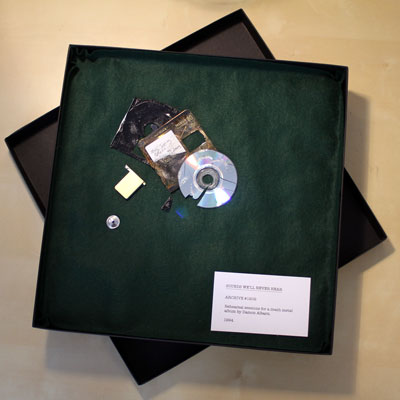 The parksong series – an ongoing series of experimental vocal works – are musical compositions presented in the form of visual art prints. Drawing on verbal scores, visual representation and subtleties of language, they are visual art which is music; recordings which cannot be listened to; scores which do not explicitly invite performance.

Developed as part of her 2013-14 MFA research project ‘At the Borders of Music, Art and Text: Exploring an Interdisciplinary Approach to Composition’, the ongoing development of parksong explores Caitlin’s interests in music, visual art, text and the challenging of artistic fear through a lens of amateur practice and private musical experience.

The series currently comprises the four works, three of which were developed during the project:

The graphic elements of each piece are drawn or created manually, then scanned into photoshop where they are combined with digital text before being professionally produced as giclée prints on heavy art paper. At present only a single Artist’s Proof exists of each piece, although there are plans to produce an edition at some point and possibly a zine variant of the series when complete. If you would like to know more about these works and the edition plans, or to request notification when editions are available to purchase, please contact Caitlin.

Sepiascape with Grey is a graphic score commissioned by Valentina Pravodelov for her MMus vocal recital in January 2014. Destined to be performed in the context of a programme of darkly urban popular music by bands such as Massive Attack, Portishead and Joy Division with a backing band of guitars, keyboards, backing vocals and drums, it incorporates a short text which mashes up a single line from T.S. Eliot’s poem The Wasteland with words selected by the composer:

The score was created using sepia acrylic ink (using a dip pen with copperplate nib, and as a wash) and black watercolour overlaid with digitally created handwritten text.

It is dedicated to Valentina Pravodelov.

Four Black and White Pieces is a set of four graphic scores ‘for any number of performers or imaginations’. Created for the Closet Music ‘Travel Pack’ project, which was looking for postcard-sized pieces which could be used by travellers to imagine their own music, even if they didn’t read musical notation, Four Black and White Pieces is also appropriate for (audible) performance. The four pieces can be performed in any orientation, either sequentially (in any order) or simultaneously. If there is more than one performer, they can either all work from one Piece, from different Pieces, or from the same Piece in differing orientations.

As with my other graphic score works, the interpretation of the images is entirely up to the performer(s) – my interest in this form of notation is in enabling performance, and in seeing what performers bring to the work. I don’t specify certain elements to represent certain musical concepts because, in my control-freak way, I feel that if I want a melody that is ‘this’ shape, I should just write out the notes myself. I love hearing performers create sounds I wouldn’t ever have imagined with these pieces – every performance becomes a composition lesson.